So, what is Romanian food anyway? I’ve been in Romania for about a week, and while I don’t pretend to be an expert on this country’s cuisine, I definitely do have some impressions. The food here is rich in meat, cheese and dairy, and starches like polenta, potatoes, and bread; as such, it is quite hearty and filling. I’ve found that a good meal at lunch is more than enough to last me for the rest of the day, leaving me craving only a small snack to nibble on during the evening hours. Like in other Balkan countries, fresh fruit are found in abundance, even in small grocery stores, though the quality of which at times may leave something to be desired. While perusing a menu, there are two things that strike out: one is the use of all the parts of an animal – meat, liver, tripe, brains, tongue, testicles (yes, you read that right); the second is the presence of dishes normally associated with German and Hungarian cuisine, owing to the presence of these cultures in Transylvania – you’re just as likely to find goulash and schnitzel on the menu as you are sarmale, which is perhaps the country’s signature plate, consisting of minced meat and rice stuffed in cabbage leaves and most likely served with the ubiquitous mămăligă (polenta).

While certainly not the most refined, Romanian food is undoubtedly delicious and cheap! Obviously, prices are indexed to what people make here, but as a traveller from North America I have certainly not needed to hold back on sampling the country’s food due to budgetary restraints. And I have up to two more weeks to continue doing so! It’s for your benefit as much as mine, since I’ll be sure to bring my camera along – and that means I can post more yummy pictures here! 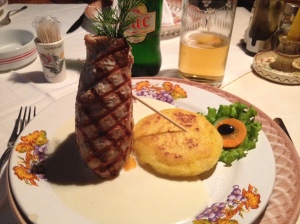 pork goulash with beans – 600 grams worth! 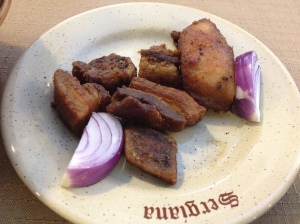 pork crackling – artery-clogging goodness, served as an appetizer during a dinner 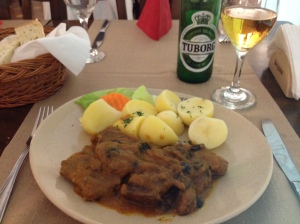 beef tongue with olives and potatoes – so tender

country sausages, cucumber and tomato salad – more meat, some vegetables on the side for good measure 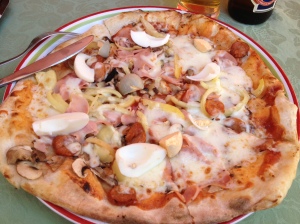 pizza – the universal food? with an assortment of toppings